FREE SHIPPING WITH ANY $75 PURCHASE!
0 Items

DHT, a metabolite of the body, is a principal cause of hair loss, thinning and male pattern baldness. The enzyme 5 alpha reductase (5-AR) synthesizes DHT from testosterone in the adrenal glands, prostate and the hair follicles. DHT is often dubbed a useless hormone that serves no function in the body except to do harm, but this isn’t exactly the case. DHT does indeed help the body grow and regulate itself, however, it is true that elevated levels of DHT have been shown to play an influential role in hair loss that may eventually male pattern baldness.

How DHT may contribute to my hair loss? 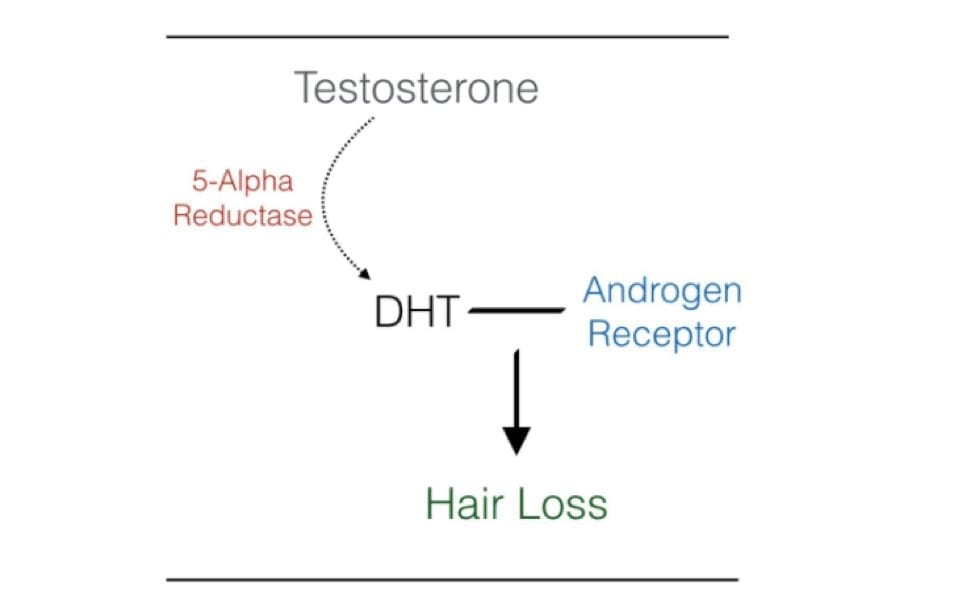 Studies consistently suggest that DHT is directly responsible for 95% of the hair loss experienced by men and women. 95% of hair loss! Testosterone in the body gets converted to DHT by an enzyme called 5-AR which then binds to androgen receptors triggering hair loss. DHT causes hair loss by reducing and even inhibiting proper growth of hair in the hair follicles through a process called miniaturization – whereby the hair follicles shrink and the natural hair growth cycle is dramatically shortened. Specifically, the growing stage (anagen) of the hair is shortened and the resting stage (teolgen) is extended. Eventually these hairs can stop growing all together. Additionally, during the miniaturization process, genetically susceptible hair follicles are affected resulting in hairs that are finer and lighter in color. DHT also attaches itself to the receptor cells of hair follicles at the root, which prevents the nourishment necessary for growth from reaching the hair. DHT Blockers are frequently turned to as a more natural choice than Propecia – which has been noted for its many side effects. But are DHT Blockers worth the hype?

DHT Blockers can be a great way to combat hair loss but as with all supplements, ingredients matter. The two most well know natural DHT blockers are Saw Palmetto and Pumpkin Seed oil. If your DHT Blocker does not have these ingredients, you’re likely not to see the results you’re hoping for.

Due to the links between DHT levels and benign prostatic hyperplasia (BPH), the effects of saw palmetto on DHT levels have been studied and tested extensively. Hair loss has been shown to improve with men suffering from male pattern baldness and improvement in growth rate has been seen as well. Pumpkin seed oil – which is extracted by roasting and pressing the seeds from two strains of pumpkin, curcubita pep and curcubita maxmima – has also been shown to provide a significant increase in hair count as well.

Taken together in a well formulated DHT Blockers these two heavy hitters have helped many reduce the amount of hair fall they’re experiencing with consistent use.

Many people experiencing hair loss have often considered hormone therapies, hair plugs or even hair replacement surgery. However, many of these approaches are painful and extremely expensive. For example, hair replacement surgery can range anywhere from $4,000 – $15,000! Also important to keep in mind is the fact that these invasive and sometimes painful procedures are considered cosmetic and thus paid out of pocket. DHT Blockers are a less invasive and far less expensive option to consider.

A high quality supplement like Hair Stimulator DHT Blocker can slow or inhibit the conversion of 5-AR enzyme to DHT to address hair loss effectively. Not only does the supplement address the hair loss by reducing the production of DHT, but it’s also a full spectrum regrowth supplement formulated with Biotin folic acid and other key ingredients designed to help your hair growth faster and fuller.

Learn About Our Amazing Rewards Program!

Sign up for the Hair Stimulator Newsletter and get exclusive access to special discounts, product giveaways and the latest healthy hair tips!

You have Successfully Subscribed!